Dance is the original form of artistic expression. It has only one instrument—the body—but it creates movement, lines, forms, and rhythm. It connects us to the earth, the sky, the cosmos, Nature. By calling on the ritual of dance to generate new forms of painting and sculpture, Alice Anderson takes part in a long ancestral tradition that runs from the indigenous peoples of the Americas and Australia to the sources of modern and contemporary dance.

As she puts it,

Her unique approach linking art and dance evokes the pioneering choreography of Mary Wigman, Loïe Fuller, and Isadora Duncan; the kinetic art of the Bauhaus; or Nicolas Schöffer, who attempted to create interactions between machine and human, robot and dancer.

One cannot look at her work without grasping and understanding the process. These are not “paintings” in the traditional sense of the word but “Geometric Dances.” This general term includes pieces of different sizes made in various ways, with the subtitle sometimes indicating the object or material that has left its shape or imprint.

Alice Anderson has a special relationship to objects, which to her are “non-human entities.” She tries to memorise all the tools of today’s technology, including computer batteries, phones, alkaline batteries, drones, hard drives, and even packing boxes, either by shrouding them in copper-coloured wires or leaving their coloured imprint on a canvas. When working with these wires, she uses slow gestures and makes the imprint through dance movements either alone or in a group, thus restoring a link between the living and the material, the human and the non-human.

The coloured motifs that appear on black paper or felt suggest constellations, circles, and vortices.These repetitive rhythms of triangular or cubic geometrical shapes  sometimes resemble contemporary totem poles in their vertical layering. Alice Anderson soaks the object in paint and then, using her movements and breath, she comes in contact with the canvas. She repeats the process with another colour. This ballet between the body, the object, and the floor—used as a dance mat—is extremely precise and complex. The artist says she is not concerned with the visual results or the aesthetic appearance of the works. What counts for her is the physical relationship with her environment: the pattern results from the energy of a body in motion. The material status of these “paintings” is ambiguous. Although they evoke gestural abstract paintings or even drip paintings, they are actually traces of performances whose motifs are random, while still very strong and visually coherent.

In this way, Alice Anderson connects with shamanic and ancient practices, affirming a connection to living beings while incorporating new technologies. It is not by chance that she uses copper-coloured wire to “memorise” her objects. Copper is the basis of internet connectivity, a symbolic material. Extracted from deep within the earth and laid down again to cross the ocean floor, it “represents the chthonic sun. Through its luminous appearance and its shadowy origins, copper is a union of opposites.”

The Top 5 Art Exhibitions by Female Artists in London

Tabish Khan the @LondonArtCritic picks his favourite exhibitions to see this month – this time they’re all shows by female artists to coincide with International Women’s Day on 8 March. 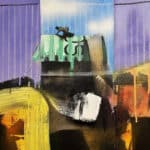 Almine Rech London is to present its first solo exhibition of American artist Marcus Jansen. This will be Marcus Jansen’s […]

The Top 5 Exhibitions to see in London right now

Tabish Khan the @LondonArtCritic picks his top exhibitions to see right now. Each one comes with a concise review to help you […]