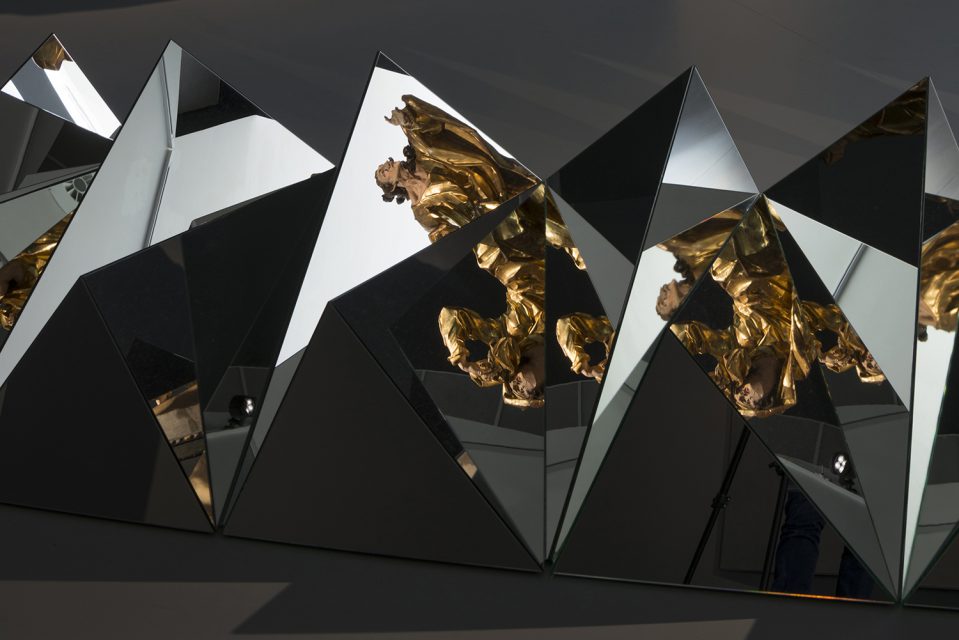 Organized with M KHA (Museum of Contemporary Art of Antwerp) and KMSKA (Museum of Fine Arts of Antwerp) and the City of Antwerp, the project will be featured in Milan in a new and more extensive version, following its first presentation in the Belgian city from June to September 2018. Luc Tuymans conceived an intense visual experience presenting more than 80 works by 62 international artists, including 25 exhibited exclusively at Fondazione Prada.

“Sanguine” is a personal interpretation of the Baroque based on innovative juxtapositions and unexpected associations of works by contemporary artists and Old Masters. Avoiding a rigid chronological order or a strictly historiographical approach, Tuymans evades the traditional notion of the Baroque and invites viewers to reconsider 17th century art, as well as the contemporary research, by placing artists and their role in society at the center of the exhibition narrative.

In the wake of Walter Benjamin’s analysis, according to whom the Baroque marked the start of modernity, Tuymans explores the search for authenticity, the political significance of artistic representation, the emotional turmoil generated by art, the celebration of the author’s personality, and the international dimension of the art scene, recognizing the Baroque as the primary point of reference for today’s art. Not only does “Sanguine” push the traditional boundaries of the Baroque notion by extending its duration to the present day, but also it shows how over the past two centuries artists have helped redefine it, from the negative sense attributed to the word by art critics during the late 18th century, to the reassessment operated by Postmodernism and the re-establishment of a Baroque and figurative expressiveness in the art of recent years.

The exhibition title—a word that signifies the color of blood, but also a violent and vigorous temperament, and a pictorial technique—suggests a multiplicity of perspectives to interpret the exhibited works, in which violence and its simulation, cruelty and dramatization, realism and exaggeration, disgust and wonder, terror and ecstasy coexist.

In Luc Tuymans’ vision, Caravaggio—who is represented in the exhibition by the painting Boy Bitten by a Lizard (1595-96) and David with the Head of Goliath (post 1606)— was the first to transcend classical and Mannerist tradition thanks to the psychological realism expressed by his innovative pictorial language; he also embodied the spirit of the Baroque artist and the wish to communicate with the public through the power of representation.

The comparison between Caravaggio and Peter Paul Rubens, the Antwerpian portraitist of prominent figures and himself a diplomat, reveals the formal ambiguity characteristic of Baroque painting and the complexity of the relations developed by artists in Europe during the Counter-Reformation and the rise of the merchant class.

The Baroque art of the 17th and 18th centuries was the first global art movement, though it maintained the specific qualities and features of the different local cultures, as well as the sensibilities of the individual artists, represented in the exhibition by Guido Cagnacci, Andrea Vaccaro, Anthony van Dyck, Jacob Jordaens, Francisco de Zurbarán, and Johann Georg Pinsel, among others. In our even more globalized and connected world, suggestions, dynamics and themes typical of Baroque art can be identified in the works by contemporary artists geographically remote from one another and brought together by Luc Tuymans in “Sanguine.”

A sense of disjointed and hyper-realistic corporality and physicality, rendered by different means—from painting to sculpture, from photography to drawing, from installation to video—is expressed by the exhibited works. Part of them has a strong visual and emotional impact, such as Fucking Hell (2008) by Jake and Dinos Chapman, in which the grotesque aspect of terror is embodied by 60,000 toy soldiers that practice or suffer violence inside large vitrines, and Nosferatu (The Undead) (2018), a video-installation by Javier Téllez that explores cinematographic memory and the isolation of the mentally ill. The lithographic series Thanatophanies (1955–95) by On Kawara that represents the deformed faces of victims of the nuclear bombs in Hiroshima and Nagasaki expresses the horror of war and, in the context of “Sanguine”, heralds the severed head of Goliath, to which Caravaggio lent his own face, and the pale child in Sleeper (2007–08) by Michaël Borremans. The Lamentation over the Dead Christ (1614) by Peter Paul Rubens displays the macabre vulnerability of victims, a subject that is also central to the installation Flanders Fields (2000) by Berlinde De Bruyckere and to Marlene Dumas’s painting Dead Girl (2002). Fragility and monumentality coexist in the sculpture Il giorno mi pesa sulla notte I (1994), made from marble, gold, lead and glass by Luciano Fabro, in the installation Room with Unfired Clay Figures (2011–15) by Mark Manders, as well as in the works by Cheikh Ndiaye and Diego Marcon. The excess and kitsch, showed in the wooden sculptures realized in 1758 by Johann Georg Pinsel, can also be perceived in the exhibited works by Jacques-André Boiffard, Roberto Cuoghi, Kerry James Marshall, and Takashi Murakami. The beauty of form that conceals dramatic or intimate contents is explored in the works by John Armleder, Lili Dujourie and Giuseppe Gabellone, but it is also evident in the sensuality of the Dying Cleopatra painted in the early 17th century by Guido Cagnacci. The dynamism of the portrayed figures and the coexistence of comedy and tragedy in the same scene can be traced in Andrea Vaccaro’s Triumph of David (1650) and in the painting When the Going Is Smooth and Good (2017) by Njideka Akunyili Crosby.

FAD BAZAAR AND THE ART OF NEW TECHNOLOGY

There are two wrong – but curiously common – ways to approach new technological developments in the arts: automatically reject […]

Takashi Murakami and Absolut Art are pleased to reveal an exclusive new print by the renowned Japanese artist, the second of three prints […]

Fondazione Prada support Damien Hirst in his new charity campaign in aid of Save the Children’s program for education in Italy. Damien Hirst has created four new limited edition prints to be released today, 15th September 2020