Want an art selfie? The most obvious chances are currently provided by the two mirror rooms in Tate Modern‘s Yayoi Kusama exhibition. But it’s popular enough that it is pretty much sold out.  I just about got myself in…

Staying at the Tate, it’s simpler and cheaper to provide the something new in Monir Shahroudy Farmanfarmaian’s ‘Something Old, Something New’ by fracturing your self in its 50 year old mirror…

These (top image) leave the eyes blank, so inviting viewers to fill in the space with a reflection of their own eyes. That isn’t the easiest manoeuvre, many of the eyes being at awkward heights or angles. If you succeed, though, you are also projecting yourself into history, for Feinstein’s works are based on  sixteenth-century German sculptural altarpieces carved in unpainted limewood by such masters as Tilman Riemenschneider – indeed, they make for an informative crash course in the genre as well as posing the question: ‘have people changed?’. My images show for one work the originating inspiration (a detail from Martin Kriechbaum’s Saint Christopher, c. 1490 at the Pfarrkirche Sankt Wolfgang, near Munich); Feinstein’s take on it; and my fairly risible attempt to inhabit it – others can doubtless do better!

Love and Loss the third Inside Job staff exhibition to take place at Tate Modern opens this week.

Love and Loss is the third Inside Job Tate staff Biennale exhibition to take place at Tate Modern. The curators of the show are; […]

Stay up all night at Tate Modern in a Surrealist inspired Tate Late.

On March 25th grab yourself a bottle of Absynthe or two and head down to Tate Modern for a night of Surrealist fun. 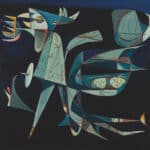 Now ‘Surrealism Beyond Borders’ repeats the approach, but with 160 artists from around the world rather than concentrate on Surrealism’s Paris-based tradition.