Downtown Los Angeles’ Corey Helford Gallery (CHG) has announced the return of Hera of HERAKUT, one half of the internationally acclaimed artist duo from Germany. Opening on Saturday, November 6th in the Main Gallery, Hera We Go Again marks the first major solo show for Hera at CHG, after three successful solos and participating in many group exhibitions at the gallery as part of a duo.

Hera (Jasmin Siddiqui) combines her skills as a graffiti artist, illustrator, poet, and storyteller to create fluid figures with simultaneously elegant and chaotic line and brushstrokes. Her work is often a statement on the human condition and experiences of childhood.

Regarding her new series, the artist shares,

“My affiliation is always with those who create beauty in the darkest of places. Because the gutter feels closer to my creative home than the artist studio. I come from graffiti culture. I used to be the vulture, the raccoon, the street rat, that rummaged through leftover paint buckets left on the curbs of home renovations, treasuring other people’s trash.”

Jasmin Siddiqui was born in Frankfurt, Germany in 1981. Starting at the age of eight, she has a classic art education and later studied Visual Communication and Graphic Design at the University of Applied Sciences in Wiesbaden. Hera combines her skills as a graffiti artist, illustrator, poet, and storyteller to create fluid figures with simultaneously elegant and chaotic line and brushstrokes. Her work is often a statement on the human condition and experiences of childhood.

Jasmin became internationally known after joining forces with Falk Lehmann in 2004, merging their names and styles to collaborate as HERAKUT ? HERA (Jasmin) and AKUT (Falk). Widely considered the leading German street artist duo, having exhibited in galleries and art fairs worldwide (including in France, Gaza, Germany, and Jordan, among many others), creating over 100 public murals, publishing two successful books (2009’s The Perfect Merge and 2011’s After the Laughter), and having their work in major collections around the world. Plus, HERAKUT’s live festival showings include Glastonbury (U.K.) and Coachella (U.S.), and their work made an appearance at the Dalai Lama’s Happy 80th Birthday celebration (U.S.).

This was meant to be one great art party where urban artists would have been invited to take over the walls of a London townhouse prior to renovation. Then COVID-19 hit and disCONNECT turned into something even more exciting.

While the London based artists were able to install their works in situ – David Bray moved into one of the bedrooms which has become one of the most poignant responses to experiencing isolation – most of the international contributions had to be coordinated remotely. 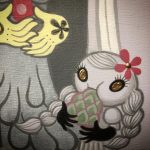 Junko Mizuno’s new show, entitled Soma, encapsulate the growth, maturity, and finality of the human existence. The definition of “soma”: 1: the body of an organism 2: all of an organism except the germ cells 3: cell body.