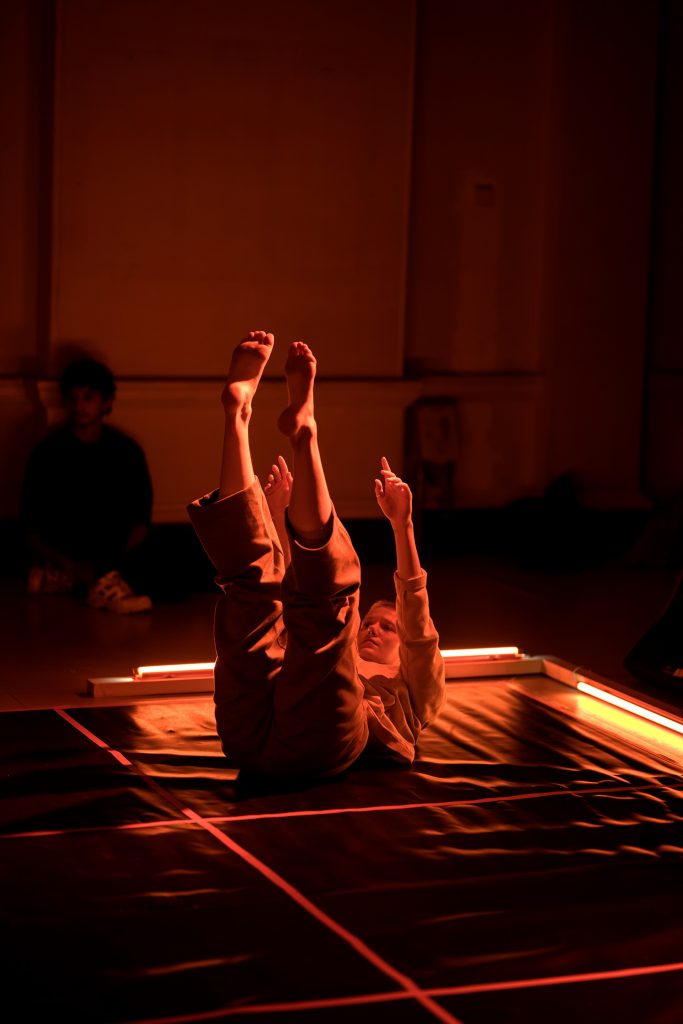 Salvage Rhythms is a piece about becoming. Devised by Sam Williams as part of his ongoing project Latent Commons, this performance work was presented at Somerset House AGM, alongside a live sound score in collaboration with the musician Roly Porter. The work took place in the befitting Lancaster Rooms atop a uniquely developed rectangular gridded mat, reminiscent of an archaeological dig, underneath which were a series of contact mics. In opposition to the predictability of a set piece of music that can be repeated over and over, the polyphonic collage of sounds shifted as conditions of the performance changed. The combined effect was a strange and fascinating work that blended a sense of multisensory, multispecies entanglement, pulling you out and back into your usual conditions before entering a new set of formations for survival and existence.

The work places bodies as entangled things enacting a sequence of melodic movements together and apart. Moving between vertical and horizontal planes in a way that only something that is attempting to grow can do. The group of performers, (Karen Callaghan, Samir Kennedy, Leah Marojevic) bind, contorting into one. As the piece unfolds one watches these bodies do strange things, some anecdotal, others more complex, intertwined, but no less hesitant. So much of how these movements unfold appear directed at developing a sense of language through the body. There are constant attempts towards something, as if Williams is working to discover a grammatical concept, where repetition is used in an uncertain, doubtful manner and then placed in context through a binding with other repetitions found elsewhere. The movements feel absorbed from a process of watching others and watching things as they grow and move around us. Their interactions feel combative, the rustling of hair, the intertwining of legs, as though they are wrestling with their desire to be one and singular at the same time. Only to unravel again. Much like you might do in your own interactions with others. Joining up, meeting somewhere, hanging out, bonding, and then departing, only to wait to have the chance to come together once more. It might seem like a simplification of life, but the simplicity of these actions only deepens our sense of belonging and in doing so, we see how interdependent we are. Partners, families, ecologies, systems. There is space within such structures to be alone and together. The process of watching this performance is the process of understanding how one is embedded in such structures. In fact, I would go so far as to consider that this piece resists solipsism and loneliness and pushes towards togetherness in a way that speaks against the rhetoric of alienation that has become a mainstay of current cultural discourse. 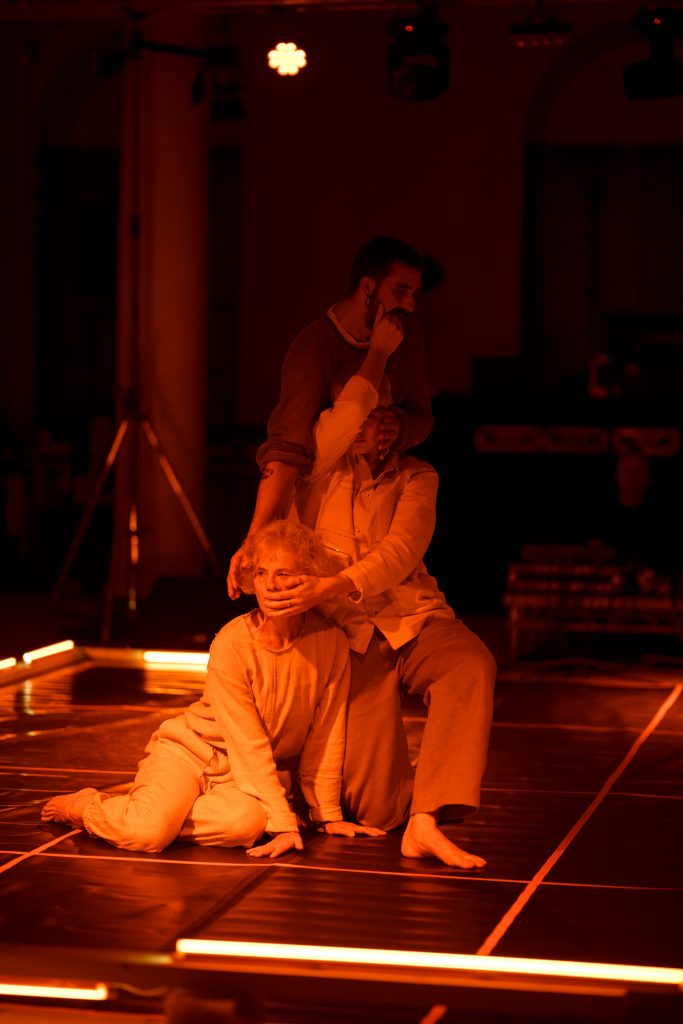 Chance plays a crucial part in making this exploration of bond come together. The performers personal battles are undertaken in a way that they are often assisted. Small detailed repetitions feel cared for. One performer lifting their thumb up and holding it there whilst kneeling in the corner of the mat exemplifies a kind of frustration with self, a searching look at the body, a need for understanding. Yet the simple motion of moving out from one position to find another relieves her sense of frustration. In this case the movement sees the performer stand slowly and walk closer to another performer. These kinds of moments are constant. As if to suggest a stuckness. Repetition as being stuck. Freedom coming from movements towards others. The suggestion here is that should you take the chance to be close, ask for intimacy, you will receive it.

I realised along the way that there is something deeply domestic, or at least home-life orientated in the work. In particular, the gestures read like habits and frustrations, and then expand into a narrative of behaviour. Through this kind of experience, I had the sense that somehow the work wanted to relate back to a kind of essential living, and a kind of violence that is not ‘violence’ in capital letters, but quieter, more patient and banal. The behaviour of every day and upon the self. Making mistakes in an email, burning the toast, itching your eczema, feeding the plants, and so on. What I feel Williams to be suggesting is that our own tolerance to ourselves is dependent on our interconnections. Our ability to grow achieved through one’s self in relation to others. And when considered in this mode of thinking, it is without question that trust, and therefore chance, continuously reappear as questions. Can I trust this figure to hold me? Can I take a chance on being in this place and knowing I won’t always be alone? Can my ability to bond allow me the opportunity to grow? Such questions make this an urgent piece for today, it positions itself in resistance to any form of overt independence and acknowledges the complexity of the systems we have found ourselves embedded in, surrounded by, and most importantly cared for. If we are to become singular, we must also learn to care for these systems and allow them to grow organically as such. 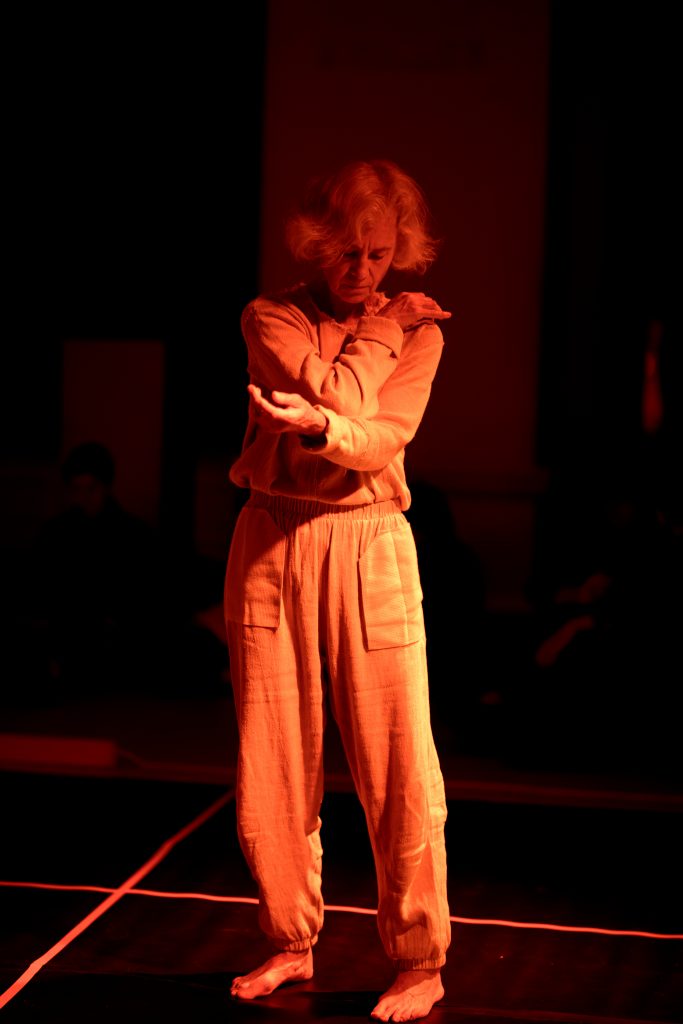 I’m Here is a new performance by Franko B, in collaboration with Anthony Martin. Known internationally as a pioneering performance […]

Review: Tino Sehgal pushes people out of their comfort zone at Blenheim Palace

WePresent, the editorial platform of WeTransfer has revealed an exclusive collab Marina Abramovi?, beginning with its inaugural Guest Curator Series.